Mies Bouhuys founded Stichting In den Vreemde during her life to continue her fight for the right for freedom of expression.

In her effort to achieve this end she used every opportunity. Like the Press Now, radio and television programme, ‘Music, War, Radio’. On 1st July 1993, Mies Bouhuys was invited to speak on the programme which was broadcast live in The Netherlands, Belgrade (Serbia) and Zagreb (Croatia).

Mies was prepared and spoke:
‘As you enjoy this beautiful summer evening on the Leidseplein, people of all nationalities eating and drinking in the cafes, the bright lights and music from every corner of the world, you are most probably filled with a feeling of wellbeing, a feeling that all is well with the world. Behaving as if this is all so damned normal, as if a couple of hours flight from here the horror story of a war is not being played out, a war resulting in misery and upheaval where ordinary people are being swept along on a tide of nationalist fervour, waves of hatred and confused loyalties, people like you and I here this evening, people who such a short time ago lived as neighbours and friends.

At the heart of this all out fight for power, how important then to hear the voice that struggles to express the truth, the voice of the journalists, radio and television technicians who work under atrocious and dangerous conditions to write, print and broadcast the truth about the war.

I belong to a generation that well knows the importance of the role of truthful, independent and free reporting under a reign of terror, such as was experienced during the attempt by the Nazis to impose their ideology through terror, the right of the mighty to oppress all who seemed ‘other’ in their eyes. The poet writes of the importance of voicing the truth whatever the cost:

When no one is willing to speak the truth
A land without rain is the soul
The soil is parched, flowers wither and die
Before their time and the air is foul 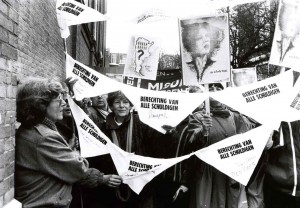 As it was then, so it is now. Reject the lies. Stand up for the truth. Failure to act will lead to loss of life, the destruction of our civilisation, our culture, our beliefs, our rights as human beings.

We must stop pretending. We cannot afford to ignore the misery of our neighbour, the stench of our neglect will come back to haunt us. Let us, where possible, stand up for those whose lives are endangered only because they dare to speak the truth.

If we fail to do this, then our own rights will wither and die as will our civilisation, our culture. Standing up for freedom of speech is ultimately, our only means of survival as civilised human beings’.

After Mies Bouhuys passed away (June 30th 2008) her financial legacy was donated to Stichting In den Vreemde. From that moment on In den Vreemde supports artists, intellectuals and journalist who, whether for reasons of race religion or sexual orientation, are obstructed in the expression of their art or ideas.