Mies Bouhuys (10 January 1927 – 30 June 2008) was a writer whose work included poetry, musicals, children’s books, musicals and children’s series for radio and television. As an activist against injustice and political oppression she was well known for her support of the Argentine Mothers of the Plaza de Mayo and the strong stance she adopted on the ‘Zorreguieta issue’.

‘Because I walk in the world’, a simple children’s poem, clearly reflects the writer’s strong indignation at the injustice in the world and also gives a sense of the boundless energy that characterised the life and work of the writer and activist, Mies Bouhuys.

Mies was not only genuinely concerned about the world’s wrongs, but strove to investigate the reasons behind those wrongs, and her most defining characteristic may have been that she used that indignation as a driving force for turning her ideas into action.

She inherited her strong sense of justice from her father whom she greatly admired, and all her life believed this meant that she personally should make the effort to be genuinely engaged, both in her work and in her private life.

Just like her father, who protested when Jews were deported from their home town of Weesp, Mies lived her life in the belief that it was always worthwhile to stand up and say, ‘That shouldn’t happen, I won’t accept that’, not as a duty but as a matter of course. Her experiences during the second world war had a formative effect on her character and left her fully engaged in the struggle against oppression. ‘Those years during the war have made me who I am, and that engagement continued during my life with my husband.’ Her husband was the poet Ed Hoornik, survived the Dachau concentration camp. She lived with him until his death in 1970. After Ed Hoornik’s death Mies immersed herself in her Spanish studies and became more and more involved with the Latin Americans who had to flee their country at that time. 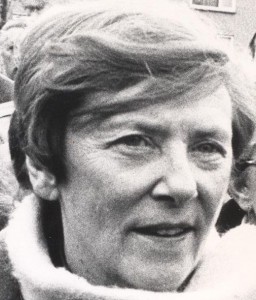 For decades Mies was active in human rights’ organisations. She sat on the board of the Resistance Museum which she helped to establish, and the board of the Anne Frank House. She was active in the ‘Nationaal Comité 4 en 5 mei’, which oversees the annual Dutch war commemorations, in the Anti Apartheid Movement (through Culture in Another South Africa, CASA) and supported the rights of oppressed artists abroad (the Dutch division of the Association Internationale de Défense des Artistes, AIDA). She also worked long and hard in her support for the struggle of the Mothers of the Plaza de Mayo through Steun Aan Argentijnse Moeders (SAAM).

In spite of this work load she managed to keep on writing, believing both aspects of her working life were connected. ‘For me all these things constitute one whole. It’s all about engagement.’

Mies had a strong awareness of everything that was taking place in The Netherlands and elsewhere in the world. ‘I have always had a sense of the great reach of the world and a sense of wanting to break out into that world. I still feel connected to the dreams I used to have and I’m so glad of that.’

Mies Bouhuys died in 2008, June. After her death, she bequeathed her estate to Stichting In den Vreemde, a trust she set up with the stated aim of supporting artists, intellectuals, journalists, scientists and activists suffering under oppression. They are among the intended audience of this bilingual publication, a portrait of this outstanding woman who committed her whole life to the struggle against injustice and to supporting human rights, wherever in the world.